For 10 days this month I was in Lahore, Pakistan, because I have very recently married a Pakistani man and we decided to go to his hometown so I could meet his family and give a wedding reception. Because not a lot of people I know have visited this country, I decided to write several blog posts about my experience of Pakistan. In this first one I describe some of the main dimensions of life there, including housing, utilities, transportation, clothing, and entertainment. Later posts will focus on more specific topics such as Islamabad tourism, society, music and arts, globalization, and the walima reception.

Please take what I say as simple observations limited to my experience; I am in no position to make judgments or analysis of life in Pakistan. The simple act of witnessing people in action rather than hearing of them across mediated communication channels is priceless. I realize that I am now communicating my more or less direct experience through a mediated channel, and I will try my best to minimize the static. The comment section is available if anything needs to be amended.

Geography: Lahore is located in southeast Pakistan, about 4 hours from Islamabad and just a few hours from the Indian border by car. Lahore is the capital of Punjab province; this historical region was split between Pakistan and India during the 1947 partition. The province has been ruled in the past by the Mughals, Sikhs, and the British, all with Lahore as their capital city. The current population is estimated around 11 million.

Housing: People with proper houses in Lahore live in stone/cement houses that are appropriate for the generally hot weather. I also saw people living in tents; I heard that some people are homeless and sleep by the roadside. In January, the coldest month, the houses are cold because it is not worth it to install any kind of a heating system in Lahore. I tend to catch a chill easily and I don’t like it, but my husband explained to me that in comparison to the extreme heat of the summer, he and other Lahoris he knows really enjoy the sensation of being cold. My husband’s house has two stories with a second stairway leading to a roof. People generally use their roofs for hanging laundry, housing birds (pigeons, chickens, roosters), and sitting and relaxing.

One of the best parts of my trip was bird watching from the Khalids’ roof. The houses in that neighborhood are built right next to each other in a long row. The ground seems to be perfectly flat everywhere with straight roads in the parts of the city I saw (Johar town, Garden town, Liberty, and Defence). The Inner City was quite different in that respect, with more uneven ground and crowded, curvy streets (see picture above).

Utilities: Due to electricity load sharing, Lahoris have public electricity for one hour and then no electricity for one hour, etc. The load sharing becomes worse during the summer when air conditioners are running. Wealthier people have diesel generators, UPS batteries, and solar power that take over when the power is out, as do many of the stores and restaurants. Poor people without such technology wait through the power outages. For example, the family tailor was having trouble completing orders we had made to him because of especially heavy power outages at his store. The city does not provide public water to most of the city, so my husband’s family pumps water into a tank every night for use the next day—currently their well extends something like 2,000 feet below the surface level. For the past 1-2 years people in Lahore and also at least parts of Islamabad have had inconsistent natural gas supply. For the 10 days that I stayed at the Khalid household they had no gas in the kitchen, forcing mom to cook by placing her pots over small propane tank burners. These burners gave off a bad smell. Pakistani home cooking generally only uses stoves and not ovens.

I have never experienced such unreliability of utilities before, and I was amazed at how the members of Farhan’s family were not just patient but even content in spite of these problems. For my part, I saw how when I first got out of bed I felt annoyed with the cold air, but when I started to focus on the people around me it didn’t matter so much. Pertaining to this subject, my husband mentioned to me that if someone’s standard of living is low, the expectations they attach to the idea of “being happy” will probably also be lower. The implication is that high standards can engender high expectations and high stress.

Clothing: Most men and women in Lahore wear the same type of clothing, called shalwar-kameez, or pants and a tunic with slits on the sides up to the waist. Below is a picture of my mother in law in one of these suits, which I find to be really attractive and comfortable.

Men’s shalwar-kameez are in plain colors with long sleeves and a loose fit. Women’s suits tend to be very colorful with patterns made by block printing and embroidery. Women also usually carry around a lightweight, long scarf called a dupatta that they either wear around their necks with the ends trailing behind them or loosely over the head. These clothes can be bought ready-made but the preference is to have them tailored. The best clothing shops primarily sell sets of fabric meant for an entire color-coordinated shalwar-kameez, which people buy and then take to a tailor along with their measurements.

As a result one finds themselves surrounded by exquisitely dressed people in Lahore! Men and women mostly wear sandals as shoes. In the short winter season people merely keep wearing the same type of clothing with a wool or pashmina shawl wrapped around them. Younger women in Lahore tend to wear tighter shalwar, to have different sleeve lengths, and shorter tunics. Lower class and older women tend to cover their heads. I learned that besides the winter shawls, there is really no heavy fabric to be found in Lahore, because the weather is too hot for most of the year. People generally wear clothes made out of lightweight cotton.

Transportation: one of the unfortunate things for me about Lahore is that you have to take cars, motorcycles, or rickshaws to get anywhere in the city, even close places that if I were in Istanbul I would walk to. Sidewalks are uncommon. While I was grateful for all of the family members and drivers who took me around the city, being stuck so much of the time in the car was harder for me to shake off than the utility shortages. Here are some views of the crowded streets from the car: 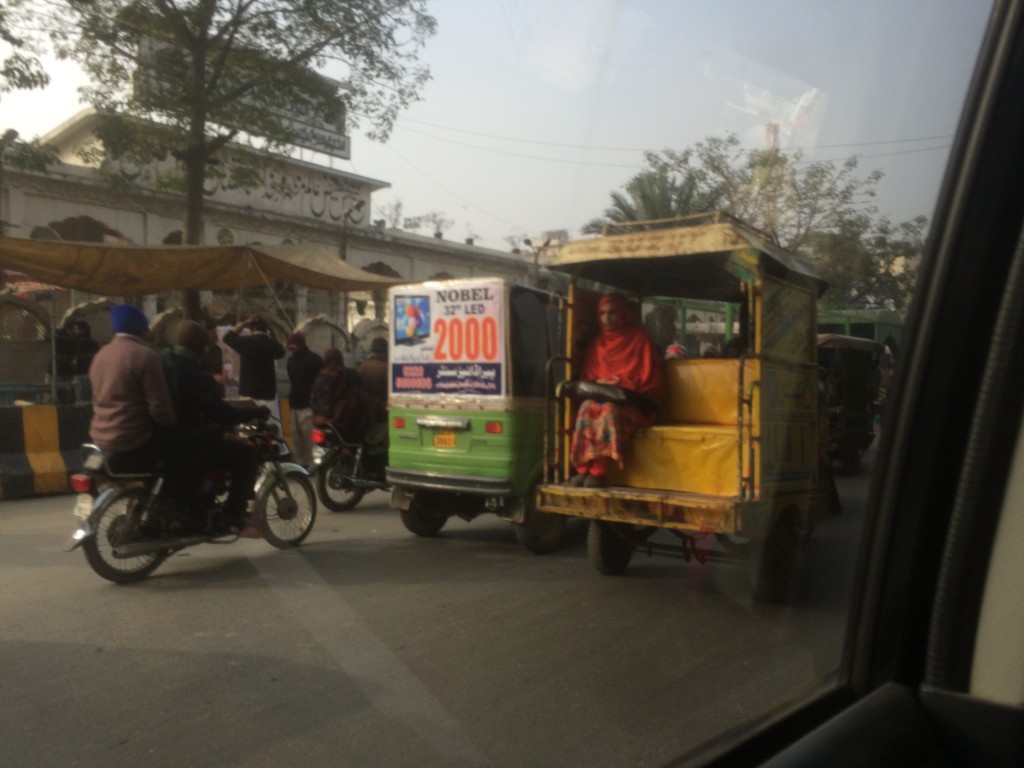 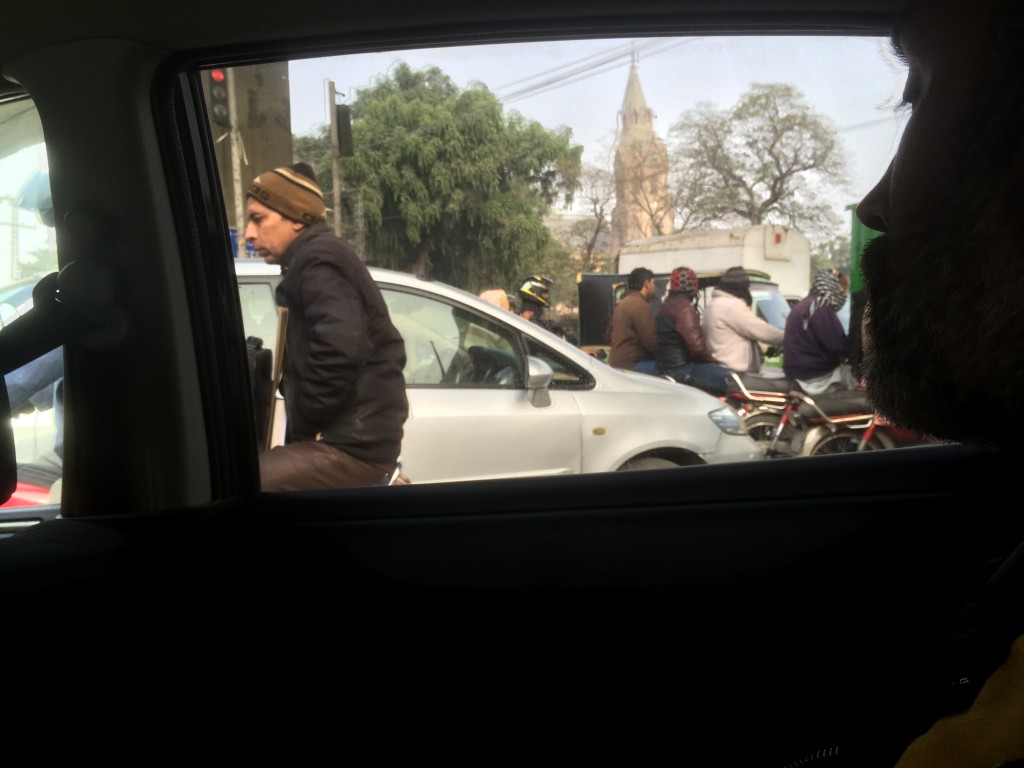 The government doesn’t provide any public transportation, although one above-ground metro line is currently under construction. During the one walk I took in Lahore, in Johar town, I was struck by how much more beautiful the flora and fauna appeared to me than when I was viewing it from a car window. Unexpectedly, I gained a new perspective from this trip on how powerfully cars can mediate our experience of the world around us.

Entertainment: following Islamic tradition, selling alcohol is illegal in Pakistan and most Pakistanis do not drink alcohol, so there are no bars or clubs in Lahore. People spend a lot of time with their families, especially going out to restaurants and to movie theaters. The restaurants offer a wide variety of cuisines, such as Chinese, Thai, and American, in addition to the many restaurants serving the common Pakistani dishes. People only give parties (by which I mean large social functions) for weddings, but it is common for small groups of friends to hang out at someone’s house.

Extremists: So far, readers might have noticed that I haven’t mentioned topics we are used to hearing about Pakistan from the media, such as religious extremists, women confined to burkas, terrorists, or mass Islamist demonstrations. Now, it is true that during the time I was in Pakistan the Bacha Khan University attacks took place in the northwest KPK region—this country does continue to struggle against a very very  small portion of its population inclined towards violence who know how to exploit a governing system corrupt on all levels. I did notice that universities, other schools, churches, and Shia mosques were guarded with imposing walls and security personnel. What I witnessed personally, however, were nothing more than scenes of people trying to accomplish common, everyday tasks like making meals, shopping for clothes, having business meetings, attending classes, going to the bank.

In terms of how women dressed and behaved in Lahore, I saw the entire spectrum, from both women with their heads uncovered and covered working in top professional positions in businesses to the much less common women wearing niqabs out shopping. At least where I was in Lahore, I did not observe societal norms compelling women to cover their heads (except of course inside the mosques).

This concludes this entry on daily life in Lahore. It was a pleasure for me to encounter the people of this city, and I look forward to telling you more about them soon!