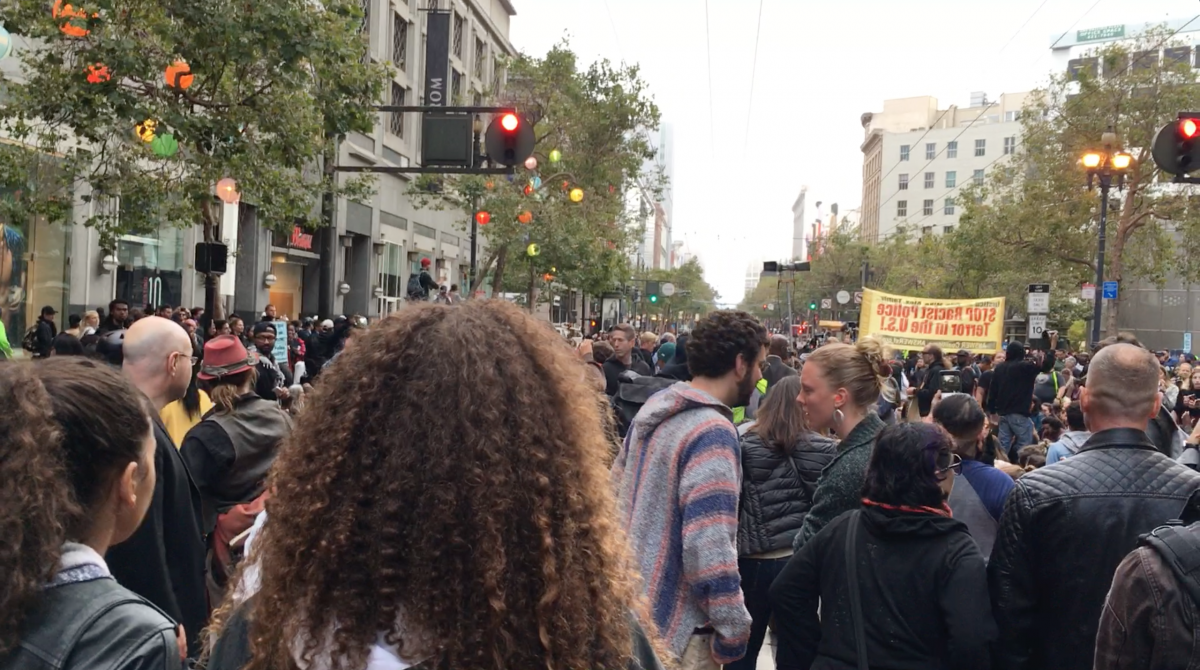 While in San Francisco for a conference I was glad to have participated in a Black Lives Matter rally. It started right next to the hotel where I was staying. I hesitated for a few weeks after the rally about whether or not to put this material on my blog, because it might be seen as controversial. You will hear me chanting and cheering at several points in the recordings, so it’s pointless for me to try to present myself as a neutral observer. Yes, I agreed with many of the things that were said, but not with everything. I am not really trying to advocate a certain position by doing this. What I would really like is to make what I quickly realized was a beautiful event from an acoustic and aesthetic point of view available in some form for people who are interested in sound. I also think it is important to give the many powerful speakers in the second recording platforms like this humble one to share their messages. Even if you don’t generally agree with the BLM movement, I encourage you to go through the table summarizing the speeches and just pick a few short moments to listen to that strike you as interesting for whatever reason.

If any of the speakers do not want their speeches to be put online in this manner, please send me an email and I will remove them.

I started recording the protest because I wanted to perhaps preserve something of the incredible vibrancy of the air around me. Sometimes I was holding my iPhone over my head but at other points I had it near my waist or in my purse. It’s not amazing in quality but it seems good enough to me to share with other people. I’m not sure how many people can hear it, but there’s a constant, low rumbling sound throughout the recording, like an approaching wave of water. I really was hearing that sound as I walked, and it seemed to me like a huge cloud of sound. I think this sensation may have been occurring because 1) We were always walking between pretty tall buildings, which seemed to confine the sound and cause it to kind of pile up on itself; and 2) The crowd was large but not really large, so that I could discern many of the more delicate sounds that huge numbers of people chanting might have covered up.

During the first recording (27:32) you can heard sounds such as metal clanging (12:56), drums, bells, the ticking of bike wheels, police walkie talkie chatter (3:00, 6:00), people having mundane discussions. Some of my favorite moments were when multiple chants coming from different parts of the crowd were weaving together (20:30, 24:10).

We were walking down Market St., from Embarcadero Center/Justin Herman Plaza until City Hall. I started recording somewhere near the plaza. I don’t remember where I stopped the first recording, but it was only around half way through. Reliable estimates of the size of the crowd seem to converge around 1,000 people. Throughout the march there were lines of police in uniform; some standing and some walking along with us. They were shutting down all cross traffic for us and allowing us complete freedom to walk down the entire street, in all the lanes of traffic, as far as I observed. The police were also moderately dressed—no tactical gear, no riot shields, no showing of weapons. There may well have been those kinds of police stationed further away from the protest route, but I didn’t see them. All of the protesters that I saw and heard were behaving completely peacefully; indeed news reports of the protest also do not mention any violence on the part of protesters or police.

The second recording features over 30 speakers who represent a really wide spectrum of viewpoints. Some protesters used a lot of profanity; some didn’t use any. Some people listed statistics; others read poems. Some expressed strong anger while others took a concilatory tone, but I think everyone was united by a sense of hope despite what they and their loved ones have personally suffered. I can say that it was simply an honor to listen to these people speak–they were far more eloquent than I could ever dream of being, and I learned so much from them. Most of them were quite young and seemed to be speaking with little preparation. And I think their stories, ideas, and verbalized feelings need to be heard by people around the world. For people who are intrigued but can’t listen to the entire 2-hour recording, I have made a table that will tell you where each speech began and what the main content was. Be warned: many of the speeches do contain profanity. Parents and educators might first listen to deem which portions seem appropriate for younger listeners.

Basic Information about the Speakers in the Second Recording