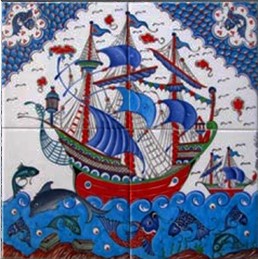 Tonight I had the great pleasure of hearing and seeing a live performance of Onur Türkmen’s Sailing to Byzantium, a composition that Onur told me about a year ago and that I have been anticipating ever since. I had gotten worried that perhaps an obstacle on his way had come up, but suddenly last week I got a Facebook invitation to a performance of the piece in Istanbul, at Koç University.

Onur has subtitled the work “Ay, Kuğular ve Ruh Üzerine bir Törensel Drama” or “A Ritual Drama about Moon, Swans, and Soul.” It is an accurate description of my impression of the piece, which consists of 9 parts, some of which are songs and others of which are entirely instrumental. The texted portions are on a few strange and lovely poems by W.B. Yeats and Ahmet Haşim. Many of the instrumental sections relate to single words in the poems. The ensemble for the premieres in Istanbul and Ankara (held a few nights ago) consisted of the Irish Yurodny ensemble (Scottish harp, violin, piano, saxophones, trombone) and 3 Turkish musicians (ney, kemençe, cello). There was one Irish vocalist and the kemençe player also served as the Turkish vocalist. At many points the performance had a ritualistic air that encompassed a gradient of solemnity and ecstasy that reminded me of George Crumb–especially his Ancient Voices of Children. Like Crumb, Onur and the musicians made avant-garde music with a touchingly human voice.

We arrived to the concert a bit late, joining everyone at the start of the 3rd movement, a gorgeous instrumental section that featured the Scottish harp. Catriona McKay, the harp player, seems to have what Franz Liszt referred to as transcendental execution: high technical skill that allows her great freedom and precision of expression. My attention was immediately aroused by this display. I can say the same thing for the performances of violinist Diamanda La Berge Dramm, cellist Gözde Yaşar, and saxophonist Nick Roth. (I cannot comment on the other musicians regarding this issue, because they seemed to have less virtuosic, soloistic parts.)

The main reason I was so keen to hear Sailing to Byzantium was because Onur had explained to me that it would combine Irish and Turkish traditional instruments. Onur is someone who has for several years tried to engage in a systematic and personal way with the Turkish makam (scale) system and with traditional Ottoman-Turkish aesthetic ideas. So, I believed that he would not simply give some of the melodies to a Turkish instrument or splash in some traditional percussion parts. Indeed, the interface between Turkish and European art and folk music proved to be complex, inventive, and surely weighted. I heard the noisy, percussive, mostly un-pitched sound world of avant garde European art music; the sober, curving tones of Turkish classical music; the poignant strains of Irish music; and both cool classical art and warm popular vocal hues. The result was a fusion of very particular sound worlds into something familiar and yet noticeably unique, a fine balance to strike. One moment of especially impressive fusion was the use of prepared-piano alterations to the piano strings to alter the pitches into what sounded to me like the tuning of one of the Turkish makams. Another was when Nick Roth circulated the stage, performing a solo part for soprano saxophone that at first reminded me of the playful exploration of timbre in Berio’s Oboe Sequenza and then transformed into an exuberant realization of Black Sea tulum (bagpipe) playing.

Lately, the strongest sign that I am listening to a good piece of contemporary art music is that I become still and very focused on each and every perceptible sound. Generally, Türkmen’s musical textures are uncluttered and unfold with patience, making it is easy for me to locate such a listening mode in them. This kind of listening is what I would call sincere: I have the sense that I am an open, optimistic receiver for the sounds, and as they enter my body I am freely feeling and thinking responses to it. The wonderful Turkish word “samimiyet” came to my mind during the concert, particularly during the song setting Haşim’s “Ruhum” or “My Soul”. It gave me great satisfaction alone to read this finely crafted poem, but the effect was then doubled by Türkmen’s breathtakingly sincere attempt to complement it with sounds. I suspect that as he composes, Onur considers every sound that he represents in the notation. He imagines the sufficient into existence but through some kind of patient listening and disciplined mind stops holds back any excess. Remarkably, in Sailing to Byzantium, he even managed to do at moments of seeming violent rage. I know the work of conductor Ivan Arion Karst well, and I can say that he possesses just the same qualities (I also heard tonight from one of the musicians that he is additionally a kind conductor who brings out the best performers can offer). Tonight, all the musicians echoed and amplified this loving care towards sound, with their performances coming together into a glorious garment.

Current music, wherever it lies along the popular-art trajectory, seems to be gripped by one or more manifestations of excess: loud sounds, high drama; lots of experimentation, notes, noise, sensuous beauty; plurality of sources and references; thick textures; lots of different instruments; highly energetic dancing and affective response. I do not mean to suggest that this is a bad thing–some of the popular and art music that I am most enjoying listening to at home certainly possesses abundant excesses. The compositions that I know by Onur Türkmen, however, seem to go in a less common direction. Or, no, I changed my mind as I wrote that sentence. Perhaps it is the condition of music to be excessive; in some way it is inescapably heavy (kesif), and it is a fallacy to try to escape it. Onur’s generally subtle (latif) sounds seem rarely excessive to me. At the same time I perceive in his works an imposing intellectual edifice, and they typically provoke in me a flood of meanings and interpretations. From listening to Sailing to Byzantium only one time, I already glimpsed the possibility of a great number of webs of connections that the verbal and musical components can form. The most obvious one of these concerns bodies of water. I need to study all of it again before I can say more, and I hope to be able to do that soon in another post.

For now, let me congratulate Onur Türkmen and the skillful musicians who were on the stage tonight. While you are waiting for more, readers out there, I encourage you to check out Onur’s other compositions on his Soundcloud account.